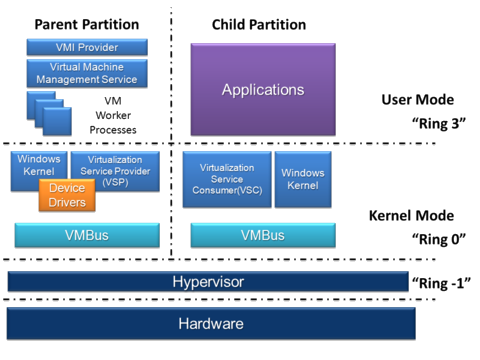 Note: Windows Vista (and matching Windows Server platform) and later, Linux versions using kernels 3.4 and newer, as well as FreeBSD can make use of Enlightened I/O, thus running significantly faster in most cases.

At the moment of writing this article, the below OSes are supported by Hyper-V platform:

Please refer to corresponding official Hyper-V Microsoft reference for detailed and most up-to-date version of the above list.

Problems and restrictions of Hyper-V

There are several known limitations of Hyper-V, some of them listed below:

Note that new features are released for Hyper-V every year, and mentioned limitations might already be lifted in the latest Hyper-V release.

IPHost Network Monitor offers, in Virtual Machines templates category, a number of templates capable of watching the state of both host and guest OSes of Hyper-V enabled system. IPHost can also be installed within guest Windows OSes, thus allowing to monitor its internal state parameters and services.